The plans for Holy Cross High School in Queens began on the campus of the University of Notre Dame in the early 1940’s out of a friendship between The Reverend Monsignor Edmund Reilly, Pastor of St. Thomas Aquinas Church in the Flatlands section of Brooklyn and The Reverend Father Frederick Schulte, C.S.C.  The Brothers of the Congregation of Holy Cross were invited to staff the Boys’ Department of St. Thomas Aquinas School in 1944 and St. Francis of Assisi School (also in Brooklyn) in 1947. Within two months after staffing St. Thomas Aquinas, the Brothers were invited to establish a high school in the Bayside West section of Queens.

Due to World War II and some difficulties the Diocese of Brooklyn encountered in securing the land on which Holy Cross was built, in September 1955, ten years after the initial plans were envisioned; Holy Cross High School officially opened its doors in the still incomplete building. With the enthusiastic support of interested parents and the leadership of the Brothers of Holy Cross, who assumed all financial responsibility and built the school through their own funding, Holy Cross was well on its way to educating generations of young people in the context of Christian values and the Holy Cross tradition.

In 2017, Holy Cross High School enhanced its mission by announcing the decision to move to co-education. In so doing, Holy Cross High School joined the vast majority of the twenty-two secondary and post-secondary academic institutions sponsored by the Congregation of Holy Cross in the United States who have also observed the guidance of Blessed Basil Moreau, the founder of the Congregations of Holy Cross. In 1856 Moreau wrote, “How we educate the mind will change with the times; how we cultivate the heart is and will remain timeless.”
The mission to educate young people in the Holy Cross traditions of the Catholic faith and to prepare them for future life situations, remains as important now as it did when the school first opened. 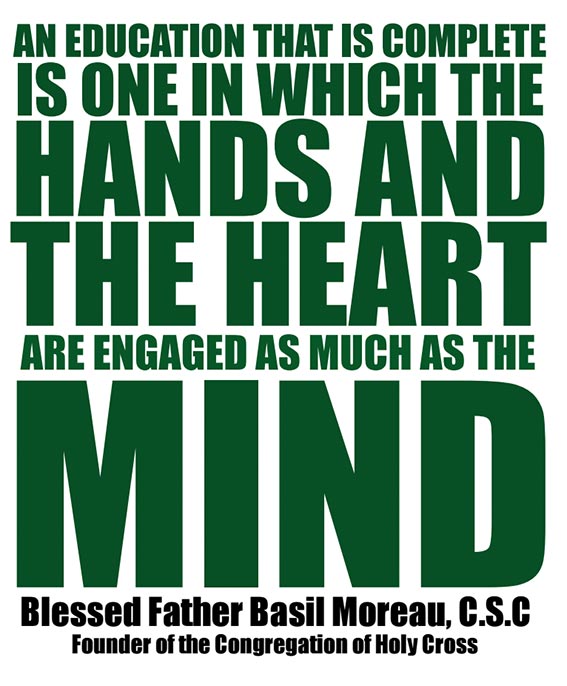