Our Annual Day of Service is on Friday, December 22nd and our goal is to serve the homeless population by creating comfort kits as a school community.

With the full participation of the school community, we will be able provide some needed assistance and comfort during the Christmas Season.

We are asking the classes to donate the following items by Tuesday, December 19:

After the service component, we will gather as a school community to celebrate the joy of Christmas with our Christmas Classic!

Service hours will be awarded for donations. See your Theology teacher for details.

On Wednesday, April 26th The Tablet editor Melissa Enaje and our very own Dr. Augustyniak worked with a group of 12 students—six of which were featured in the newspaper’s popular section, Youth Views on May 5th! We are excited (and proud) to display and read the viewpoints and opinions of our Holy Cross Men!

Great job, gentlemen and thank you!

Urban Kid Adventurers—a company that devotes it’s time to showcasing and illuminating the wonders of nature to students throughout New York’s inner city. The theme of the day was Finding God in Nature—and that students most certainly did!

Thom highlighted some of the wonders that just cannot be explained without first considering that something bigger than us is responsible for the intricate, and sometimes unexplainable beauty and design we find all around us each day. Our Holy Cross seniors embarked on a walking tour, which introduced them to edible vegetation in and around Central Park (imagine that)!  The tour also promoted mindful thought about the complexity of lifestyles and survival techniques and processes amongst birds and other wildlife.

All-in-all, the day was a huge success, especially with Thom enhancing lessons we instill in our students each day at Holy Cross.  On the day, Thom concluded: “All I know is I am just a grain of sand that when in harmony with the life around us, I become an intricate part of God’s wondrous plan for our co-habitation with all of His creations.”

Thank you for organizing this trip, Mr. Rampulla, and thank you to Mr. Schuchaskie and our senior classmen!

From May 1-5, Holy Cross will go international!  From morning prayers and the pledge of allegiance to the end of the day announcements, we will be celebrating our love and appreciation of multiculturalism and languages! Working with our Foreign Language Department, the school will fully dedicate itself to honoring WORLD LANGUAGES WEEK this week. We will even have daily food options available during lunch periods specific to the language of the day! To end the week, we will have an after-school celebration on Friday, May 5th from 5pm-7pm for $5.  For more details, please call 718-886-7250, ext. 574. 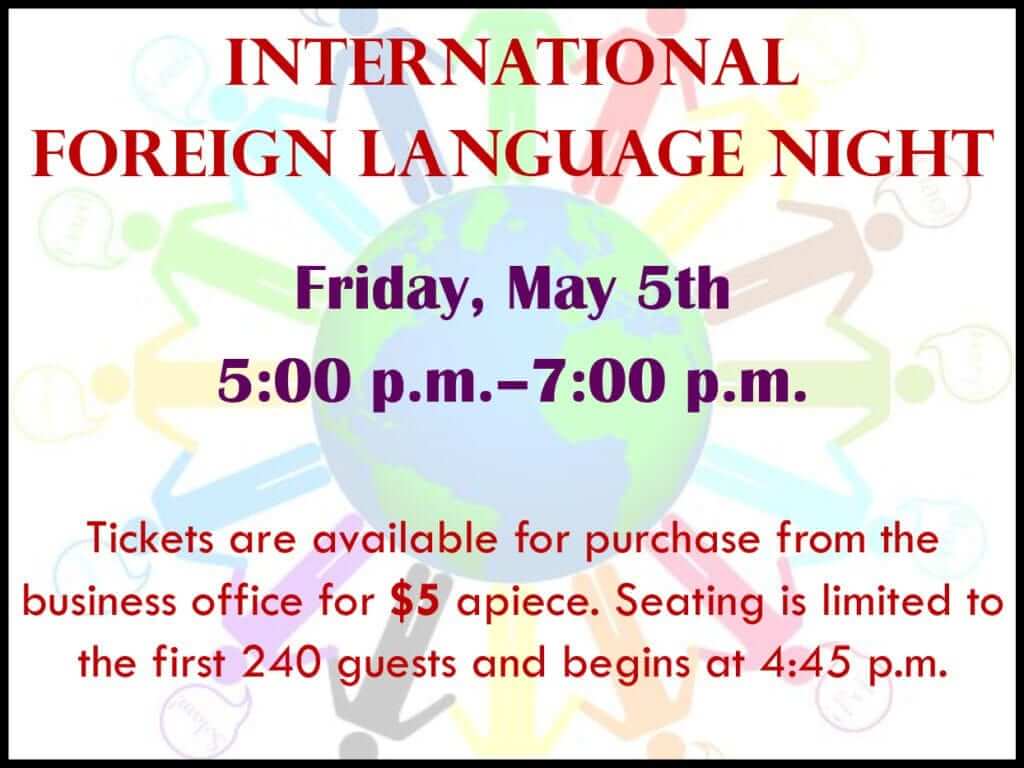 Click below for the current issue of The Lance Student Newspaper!

On Tuesday, March 21, Holy Cross students traveled to the Lower East Side of New York City to stand where hundreds of thousands immigrants once stood, walked, and lived.
For entire story and photos, click here!

Thank you to trip lead, Magaly Lopez-Lohnes, Father Randy Rentner, and Mrs. Loreen McCarthy for chaperoning this trip, and to our students for being complete gentlemen as always! 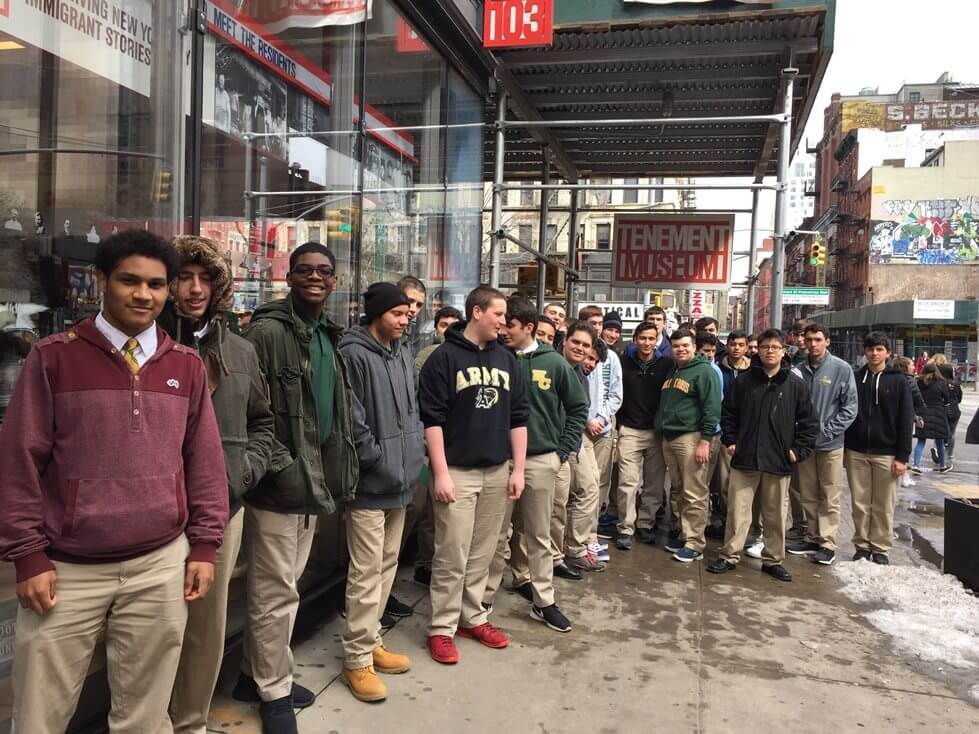 Whether it’s creating a pot filled with tasty chili made from scratch for Super Bowl Sunday or dousing enough vanilla on strawberries for St. Valentine’s Day-themed treats, students attending the new cooking club at Holy Cross H.S., Flushing, were counting culinary skills as a part of their recipe for success.

Hungry?  Perhaps you’re looking for a recipe?  Look no further!  Here we have Holy Cross’ Cooking Club student chefs under the direction of Mr. Joseph Bailey hard at work as featured in the Tablet!

Grab a snack and click here for the story!

Click here to read all about Holy Cross’ new Cooking Club and how students can join!

Thank you and happy cooking to you! 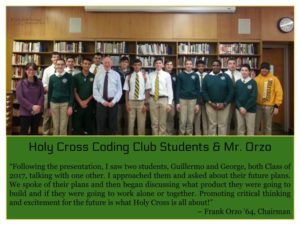 On Monday, January 9, Holy Cross’ Coding Club Moderator and Director of Instructional Technology, Fei-Wen Pirovolikos, planned quite the afternoon for her coding club members.  The club’s topics of the day were 1) Ethical Hacking—a term not widely known, but one that is vital to testing and ensuring the vulnerability of an organization’s digital security is safeguarded and maximized to full potential and 2) How to Start a Software Business on a Limited Budget.

Led by two speakers, the first topic was introduced by Theodoros Karanikolas, Class of 2018. Theo’s presentation included information as to why ethical hackers exist and questioned if ethical hacking is actually an ethical way to determine the security of data.  Theo’s well done and informative presentation initiated a discussion amongst his peers as well as faculty and staff in attendance.

The second presenter was Holy Cross alumnus Frank Orzo ’64.  Mr. Orzo is not only a Holy Cross graduate, but he is an accomplished computer software developer, business owner, and consultant with computer programming experience that spans over four decades.  In addition, Mr. Orzo holds a seat as Chairman of the Board of Directors for the school. Mr. Orzo’s presentation spoke of his time post Holy Cross graduation and how he started in the field of computers when “they were as big as the library” in the 1960s.  His slideshow served as a visionary map for students—educating them on how they too can be as successful in beginning their own business just as he has been.

To state Mr. Orzo captured his audience would be an understatement as students were already discussing what they would name their future companies.  At the end of the presentation, Mr. Orzo announced he had more news for the group.  He shared that he would be sponsoring Holy Cross’ first-ever computer software contest with a $150 prize!  Now he really had the attention of our young programmers!

The contest began on January 9 and will conclude on April 26.  The three judges are Mrs. Pirovolikos, Mr. Orzo, and Holy Cross’ President, Mr. Truesdell. Judges will choose the winning software product based upon the best idea and the most progress made.  Coding club members may work individually or as teams of two. 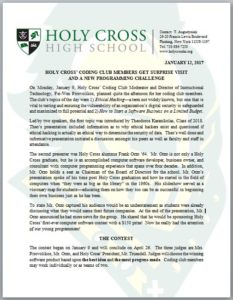 0
0
Your Cart
Your cart is empty